Cookie preferences
This website uses cookies, which are necessary for the technical operation of the website and are always set. Other cookies, which increase the comfort when using this website, are used for direct advertising or to facilitate interaction with other websites and social networks, are only set with your consent.
Configuration
Technically required
These cookies are necessary for the basic functions of the shop.
"Allow all cookies" cookie
"Decline all cookies" cookie
Amazon Pay
CSRF token
Cookie preferences
Currency change
Customer recognition
Customer-specific caching
Individual prices
PayPal payments
Selected shop
Session
Comfort functions
These cookies are used to make the shopping experience even more appealing, for example for the recognition of the visitor.
Note
Statistics & Tracking
Affiliate program
Flowbox
Track device being used
Categories
Advantages

Origin of the hammock 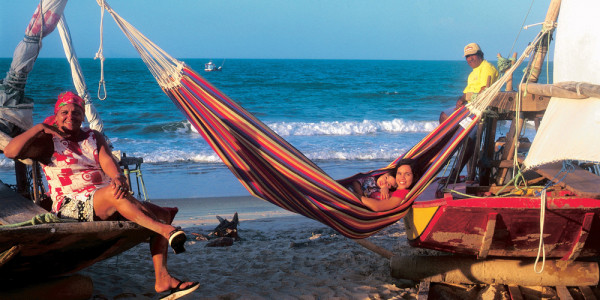 The origin of the hammock can be found in Latin America, where the Mayas already made the first hammock about 1,000 years ago.

In South and Central America the hammock developed meanwhile for the Indians as usual sleep and resting place, which protected against poisonous and wild animals, as well as against dirt and humidity. The hammock also had the benefit of a fishing net.

When Columbus rediscovered America in the late 15th century, he described how people slept in hammocks between two trees. At that time the hammock was already widespread in large parts of Latin America. It should not remain at that time:

Columbus brought the hammock to Europe, where it began its triumphal march, especially in shipping

On the one hand, the hammock can be stowed away on the ship in a very space-saving way, on the other hand it replaced the hard sailor beds surrounded by vermin. A nice side effect was also that the sailors did not slip out of their beds when the sea was rough and that sea sickness was prevented by the balancing movements of the hammock.

At the beginning of the 19th century, hammocks were still largely unknown in North America. The first narrow hammocks with a rod hardly aroused interest. Only when the rod hammocks got larger lying surfaces, the popularity and awareness of the hammock grew.

Even today the hammock is still used as a bed in many places in South America. In other parts of the world, the hammock is considered a relaxed way to lie down in the house and garden. More than 100 million people regularly use the hammock for sleeping and relaxing.

Tags: Brazilian Hammocks, Hammocks, Brazil, History
This website uses cookies, which are necessary for the technical operation of the website and are always set. Other cookies, which increase the usability of this website, serve for direct advertising or simplify interaction with other websites and social networks, will only be used with your consent. More information
Decline Configure