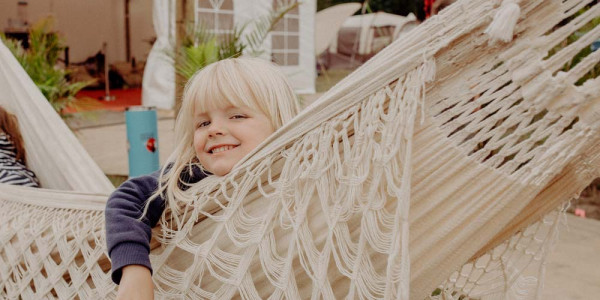 Our society is in many areas not yet adapted to the needs of non-neurotypical people, so their everyday life is often difficult. We are even more pleased to be able to offer a small assistance with our hammocks that can help to make everyday life more relaxed.
Needs of autistic children are versatile and individual. After a survey in which autistic children were allowed to test our hammocks in their everyday life, we have evaluated the results and are happy that the hammocks offer so many advantages to the kids.

Swingin in a (therapeutic) hammock for more relaxation in everyday life

The rocking of the (therapeutic) hammock can have a calming effect on the brain and thus provide relaxation in stressful situations. Possibly even de-escalate these situations. 80% of parents have used the hammock as a support for the kids in such situations.

In over 90%, the hammock was used to calm down in stressful situations/play, this was especially the case after physical exertion, after eating and after playing.

Similar things have also been seen in babies in general.

Children with hyper-reactivity often have trouble calming down before bedtime. Light rocking in the hammock and the feeling of being "held" can improve falling asleep.

Hammock as a place of retreat for children

A hammock offers a quiet retreat when overloaded with stimuli. With a large hammock you can also fold the fabric over you and then really lie in his own little cave so the hammock is also a good place to just be for himself.

Hammock swings promotes sense of balance and coordination in children

Rocking in the hammock stimulates the vestibular system in the ear, which is responsible for sense of balance, coordination and orientation.

Social interaction with others is often difficult for children from the autism spectrum. The following statements from parents when testing our hammocks are all the more gratifying:

More about the topic of hammocks in the autism spectrum

Have you ever slept in a hammock? => 5 reasons why you should definitely give it a try

XL Barbados Hammock
Content 1 Piece
€74.90 *
2-in-1 Set Koala baby hammock
Content 1 Piece
€109.00 *
This website uses cookies, which are necessary for the technical operation of the website and are always set. Other cookies, which increase the usability of this website, serve for direct advertising or simplify interaction with other websites and social networks, will only be used with your consent. More information
Decline Accept all Configure